While watching your fireworks-fanatic neighbour send his rockets into the sky, creating an explosive rain of sparkling gold, you promised yourself: “This year, I will make the change.”

But whatever we tell ourselves to change, our habits seem so ingrained that even the sparkling magic of entering a new year cannot make the slightest difference in our power over them.

by Tobias Hilberink and Thom Jansen

But still, people can change their habits, so some of us do manage to keep our resolutions. Habits play a great role in daily life, and without them, we would drown in stress. Challenging your habits makes life’s journey interesting, so to tackle them, we ask ourselves: What makes habits so hard to get rid of or pick up? What do our existing habits tell about us? And can we design them ourselves when we understand how they are formed in the brain?

When is something a habit?
To understand the difference between an arbitrary action and an habitual action, we must take a close look at our brain. When performing a new task, the neurons in your brain cooperate to find the actions necessary for successfully completing the task. In this stage, your brain has not yet found a pathway to do this quickly and smoothly, and that is why trying something for the first time is usually difficult. It is comparable to getting to know your way around a new neighbourhood. At first, you might make a few detours, but as you repeatedly make your way around the place, you optimise the route and get to your destinations more quickly.

This pathway forming process is part of how the brain learns. It involves multiple brain regions, making it a very complex process. Like this, habits are brain pathways that have undergone this learning process and have become so strong and streamlined that you usually do not even consciously perform them.

Why does the mind create habits?
The brain consists of multiple regions that determine specific human behaviour and thought processes. The front part of the brain, called the prefrontal cortex, is the part that is mainly associated with complex thought. This is where you consciously think about performing a task by making decisions about it, planning it, and executing it.

The prefrontal cortex works harder when you do something new. It makes many calculations and decisions to bring the new task to success. Because this is highly brain-intensive, you cannot perform other tasks that require your full focus. In response, the brain breaks this ‘difficult’ task up into smaller chunks and chains them together into one repeatable routine,  to save mental space. For example, driving a car becomes automatic, allowing you to chat with the person next to you.

A 2016 study on habit formation that combined existing research showed multiple stages of habits forming in the brain of mice and monkeys. When a habit is relatively new, there is active consideration of the reward it will provide, and as you repeat it, the cue (stimulus for falling into a habit) becomes independent of the reward. This caused the mice to listen to their habit of running the same route through a maze, even after they were no longer rewarded for taking that specific route. It explains why humans, just like the mice, unconsciously act out a habit on certain cues even when they know doing it is unnecessary or unrewarding.

When you start something new, the neurons in your brain fire throughout the action. But once a habit forms, neurons start firing only at the beginning of a habit (cue), pausing during the habit (response), and firing again at the end of it (reward). This pattern of clustered neuron firing is why a habit is so hard to break. 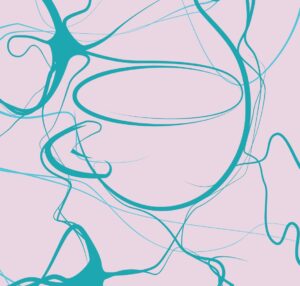 When does something become a habit?
You might be familiar with the famous concept that it takes 10.000 hours of work to become a master in a field. This urban myth results from a 1992 study by the psychologist Anders Ericsson, who measured and compared professional violinists’ and pianists’ hours of practice. He found that, on average, the strongest performers had put in 10.000 hours of practice into playing their instrument. Even though it is generally true that putting this much time into something (roughly an hour of daily practice for 30 years) results in people becoming very good at it, there is nothing magical about the number 10.000. It just takes many repetitions to get something to be so habitual that you become a master at it.

In 2009, English psychologist Phillippa Lally conducted a case study on habit-forming with 82 participants trying to create an eating, drinking, or activity habit for 12 weeks. Lally found that habit formation follows the same asymptotic curve for everyone. On average, it took 66 days for the habit to become automatic. However, some people needed more than twice that time. That suggests a person’s personal habitual tendencies and characteristics greatly influence the habit-forming ability and the required time. For example, the people with an eating and drinking habit took significantly less time to reach the asymptote than the people trying to implement an exercise habit in their lives, which indicates that the complexity of a behavioural task influences the habit’s development. So, what is the quickest way to that asymptote?

How do you design your habits?
A more recent study involving Lally aimed to provide a framework for the determinants of habit formation. The factors were roughly divided into three categories: Cue-related, behaviour related, and person-related factors.

Cue related determinants for a habit concern engaging in a particular behaviour. Planning your desired habit increases the likelihood of you forming that habit. So, thinking out specific actions beforehand is like setting up the brain pathway of a habit to strengthen it when it is finally performed. Another important facet of this habit-forming stage is the cue. Cues are the contextual features leading to performing a habit (e.g., entering the gym, smelling coffee). Influencing the detectability of the cue, making it more or less obvious (having a fruit bowl instead of placing your apples in a pantry and hiding your pack of cigarettes) will result in more control over your habit.

The second group of factors are about the behavioural response to the cue. It is essential to remain consistent and not necessarily frequent in your actions. For example, consistently following cues with the desired action will result in stronger habits. It does not matter if you forget performing your desired habit once but keep in mind that regularly skipping it will significantly slow habit formation. Simplifying a habit also helps strengthen it since complex habits are harder to wire in the brain as it divides them into multiple simple ones. So, keeping your exercise routine simple will increase the chance of making the habit stick. You can generally use the two-minute rule for simple habits, meaning you should complete the task in less than two minutes to start building a habit. The reward of the behaviour is also important. Making the habit intrinsically rewarding (which just means making it fun to do) will show better results than making the reward after the behaviour interesting. For example, when learning to play the guitar, try playing songs you like instead of dry music theory.

Studies have also shown that the level of cortisol (the hormone associated with stress) influences your habit formation. This means that stressful conditioning strengthens your habits (taking a cold shower while brushing your teeth). Due to higher cortisol levels in the early hours, a morning habit sticks better than an evening one.

When you identify a habit that you consider bad it is better to replace it with a good one than trying to get rid of it entirely. If you like to snack a lot, replacing your snacks with healthier ones works better than completely depriving yourself of any snack. This ‘overriding’ of the habitual brain pathways might demand some creativity but will eventually pay off as you have used the strength of your existing (bad) habit to create an even stronger new good habit. 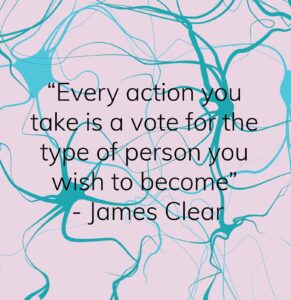 Do habits define you?
An essential part of you is your habits. You might not realise it, but an overwhelmingly big part of your life is controlled by your subconscious brain. Habits make your brain do more tasks subconsciously, which takes less energy. Some people say that the strongest people are the ones that use the most willpower, but using willpower for tasks you do a lot is not efficient. If you automate a task by making it a habit, you use less willpower and have more energy for other tasks.

As you have read, every repetitive action strengthens that specific neural pathway. Maybe the thought of physically changing your brain positively every time you perform a difficult task will give you more motivation.

Why now is the best time to create your habits?
What makes these habits is also what breaks them. As you get older, your habits establish themselves more and more. If you are reading this, there is a good chance that you are still in your student years. Why is creating habits easier at this age than in the future?

You are full of energy in your youth, making you try many new things. Also, your brain has more neuroplasticity, making it easier to change the connections between neurons in your brain. This is why a child is better at learning a language or a musical instrument than an adult. This energy level lowers as you mature and get calmer. You get better at deciding what is important to you, as you narrow your focus to that. Student life is the sweet spot in the middle where you can experiment with getting into new habits while understanding what is of value to you. It is the time when you can play around and choose the directions you want to proceed in as if it were the foreplay of your adult life.

Most of you have moved out of your parents’ home, and every one of you lives in ever-changing environments. Because you live in various settings, you do not experience the same daily cues, so it is easier to change your actions.

Becoming the master of your habits
Habits are everywhere, and the first step in influencing them is being aware of their presence. Pay attention to the automatisms that form the groundwork of your behaviour and try to identify which cues induce them, what your response is, and what makes them rewarding. After that, it is up to you to draw the line between the good and bad ones, but keep in mind that it is daunting to change a strong habit. Make sure that you enter the 66-day battle armed with a strong motivation, that is now backed by your newfound knowledge of the inner workings of the habit-forming brain.

Once you realise that you want to change or create a habit, do not wait for ‘the right time’, like a seemingly meaningful date such as New Year’s Day, but try these provided tips any day to make a meaningful change to your life and explore the world!