Pages-long, handwritten letters have been replaced with text messages consisting of two words and emojis.

People can send each other moving pictures to make clear how funny or sarcastic they intend to be. Our growing lack of attention and our craving for stimuli and exploration show a strong similarity with children scanning through books, lingering on colours and patterns whilst ignoring paragraphs, words and letters. We, virtually, sat down with Maureen Wattenbergh, illustrator of (mostly) children’s books, to talk about her way of shaping imaginary worlds. 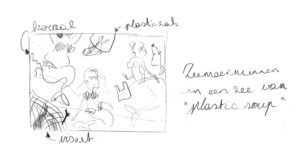 Wablief? The kind and modest word travelled from Antwerp, Belgium to our laptops speakers in Delft. Our heads moved closer to the laptop, trying to find the optimal location for Maureen to hear our questions more clearly, causing Maureen to laugh at our now enormous foreheads filling up her screen. Do you think of yourself as a designer?

I suppose so. I go through an iterative cycle of doing research, making sketches, checking with my client, combining manual techniques, failing, detailing, checking again and then, eventually, I finetune everything digitally. I officially graduated as a graphic designer, but I guess I like to see myself more as an illustrator. Although I also work on more graphic projects, like posters for certain events, I always try to approach everything as an illustrator. What does that mean, approaching things as an illustrator? Well, for instance, I create the typography for a poster from scratch instead of selecting a suitable, already existing font. I work very figuratively and with imagination.

Indeed, when you browse through Maureen’s website, you can see that she literally builds up her work. Both her illustrative and her graphic projects consist of layers and combinations of different techniques, resulting in a collage-like effect. There’s a cat fishing for mermaids, an old lady grooving to some tunes and a couple of mice drinking tea, accompanied by a dragon.

Why do you enjoy illustrating for children? Is this something that happened coincidentally or did you purposely shape your style to fit within their preferences? I just find them interesting. I’m studying to be an art teacher now as well. Children are unintendedly open for fantasy and weirdness, boldness and colours. And mistakes, haha. Adults often lose this feeling or love for exploration. Children are always curious about surreality and don’t bother trying to be vague or mysterious or broadly interested like some ‘art lovers’ do.

So this all happened quite intuitively, finding what fits your style? Yes and no. I had to work and search for it, but at the same time, while being overthrown with every possible manual and digital technique during my bachelor’s and master’s, I didn’t have any difficulties discovering what suited me and what didn’t. Though, I must say, in my second and third year I struggled with teachers who were pushing me in directions I didn’t wish to go in. But in the end, these conflicts with teachers – and yourself – help to define and shape your preferences. They shed light on challenges you can either take on or choose not to be confronted with.

In other words: in order to know what you like, it might be easier to figure out what you dislike? Not necessarily. Well, yes, maybe in the beginning. Typography for example, I really used to hate it. Today, I enjoy it. I think the trick is to experiment with the stuff you dislike, bend it to your own liking. 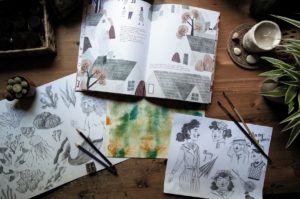 What do you think is the essence of experimentation? And how can you link this with your work? It helps that I’m still being ‘forced’ to develop my style, because I’m still studying and therefore also constantly in contact with my target group- children. But as I said before: when I dislike something I need to experiment with it in order for it to be fun. I dislike stagnation, so experimenting might even be the most important thing. I’m twenty-four. I can’t imagine that the style I have now will remain exactly the same. It makes me sad even thinking about it.

Is there anything constant about your work? Something you think will stay the same throughout every slight change or development? Its funny, at first I didn’t even know I had a style, or a signature way of working. I jumped from one technique to the other. But my friends could tell whether or not I had made something. I think this constant, recognisable factor is more theme dependent than material or technique dependent. There’s always something childish about it. Or maybe enthusiastically innocent is a better way to put it. My work doesn’t really agree with reality.

The outcome of designing is rather concrete and visual. Even the problems that are defined are often visualized and made presentable, which makes design an easy target for criticism. This must also be the case with working as an illustrator, maybe even more so. How do you deal with criticism?

At school, they often tried to comfort us by saying: ‘when we criticize your work, we are not criticizing you.’ I found this a bit of bullshit. I mean, in a way they were criticizing me, I put my heart and soul in this! I was insecure about it at first, but since I shaped my style at school I really had to put a lot of effort into it. I worked very hard for many years. I guess this gives me a legitimate reason to be proud.

Also, look around, there are so many talented people! If I’m not given a project, this is not because I’m not good at what I do, but because there are thousands of people and styles to choose from.

Having come back to the topic of conducting research, Maureen tells us she often educates herself while relaxing at the same time: I make myself a cup of tea, grab my sketchbook and watch nature documentaries to study the anatomy of these fascinating animals.

And then? I thoroughly read the story for which I need to make the illustrations and create a visual summary and personas of the main characters. When I’m satisfied I usually make a monotype, which is a pressure technique, you roll ink over a plate after which you fabricate the surface with anything that suits the illustration (brushes, sticks, sponges, etc.). After having your illustrations go through the press and dry, I make scans and then edit and combine everything in Photoshop. This fine-tuning part, I have to look out for. I tend to lose myself and my time in this end phase. Which, by the way, is stupid because I know it’s a waste of energy to spend half of the total time on a project, on details that people won’t even notice. 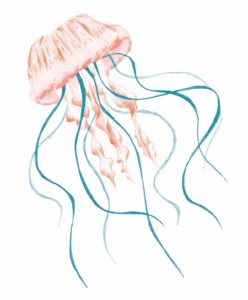 Do you ask for feedback throughout the whole process? The correct answer should be yes, right? Well, no. Haha. I find it extremely frustrating when something might look finished to the client but actually isn’t. I know I should ask clients for feedback in the beginning of the process but I can’t help but fear they might misunderstand my ideas. Having learnt from past mistakes though, I force myself to contact the client earlier on to prevent having to start from scratch.

This overspending your time on fine-tuning you mentioned earlier and your perfectionism, is this due to enthusiasm? Yes, most of the time. Stress is a factor too though, which is strongly dependent on the deadline. But I like my work, it’s very likely I’ll be working till ten p.m. without getting tense or extremely tired. I even think that if my days would be balanced out with teaching in the morning and illustrating until the late afternoon/early evening, I wouldn’t mind at all to work during the weekends as well, if needed. 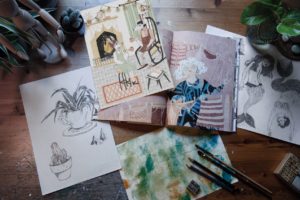 break down to build up

After having adjusted our audio settings for the third time, we further talked about both business and pleasure and the sometimes difficult distinction between the two. We discussed the tough role of teachers, especially in the creative field and our concerns about originality. In the end though, when talking about this common interest (and obligation) between designers and illustrators- embodying imagination- we came to the realization that it all comes down to breaking things down and building them up again.

As a child I would listen to my grandma telling stories for hours and then rebuild a visual world that could, or rather should, describe the story without the words.” It’s all about listening to – and then retelling a story that you can either personalize or adapt to certain expectations of a new audience, preferably maybe both.

Interrupted, though positively surprised by someone bringing us cookies, we were confronted with our own inner child, which we then tried to compromise by taking a sip of our grown-up coffee and asking a serious question to end the interview with. What’s your favorite colour? 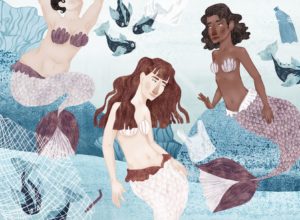