#rondjelopen is an initiative of ID study association. Do you need a break, thirsty and want to get some fresh air? Come #rondjelopen! Every two weeks we post a new walk of approximately 30 minutes. Listen and discover through our podcast all the special places and monuments that Delft has to offer and support your local café’s, bars and restaurants, because nothing is more fun than walking around with a nice drink at a discount!

It is time for another #rondjelopen! Are you excited to go outside for a walk on campus and to have a good cup of coffee at Café Labs? Let’s take a walk!

All the coffees of Café Labs are discounted 20% if you mention #rondjelopen. Whoehoe!

This time we have not made a podcast due to technical reasons. However, you can still walk the route (see below) and find out about  all the beautiful artworks on our campus. And remember you can always come by ID during your walk for a chat! Have fun!

The route starts at the square in front of our beloved Faculty; Industrial Design Engineering!

Whilst walking the route of rondjelopen #2 you come across the following hidden gems of the campus area:

Look at the Floppy Tower! Of course you pass by this every day, but did you know that the sculpture was made by 5 IDE students. They researched the possibilities of building a 25m high version of Wim Schermer’s floppy tower. A sculpture that moves by the wind.  To test their theoretical models they built a prototype of 5m and you can see it now in front of you!

Did you know that the Street Light Evolution is meant to be an ode to the engineer. The artwork showcases the innovation that has taken place in lampposts over the past few centuries. The lampposts are placed in the shape of a bouquet, which causes them to put each other in the light (sunlight). This invites the viewer to look not only at their glow, but also at the lampposts themselves, thereby appreciating the engineering work behind them. Koen Fraaijman designed the sculpture during his studies (IDE) and to realize the artwork he put together an interdisciplinary team of twelve students. Within three months they managed to build the artwork alongside their regular study program.

And did you know that the artwork was also part of the Amsterdam Light Festival in 2014. This attracted more than 700,000 visitors.

The auditorium is a rather striking building that we regularly bike past or have lectures in. The construction of this took 6 years and was quite a task! The legs carry the 1,360 tons of the protruding concrete container, which reaches a height of over 30 meters and protrudes on all sides. To make this technically possible, the newly developed technique of prestressed concrete was used. Prestressed concrete is a type of reinforced concrete in which steel wires are cast into the concrete under tension. A kind of tensioned elastic that holds the concrete together by its tensile force. There are about 35 kilometers of prestressing cables in the building. Today the building is a National Monument since 2009.

For architects Johannes van den Broek and Jaap Bakema – both alumni of TU Delft – the design of the Aula was an emphasis on the social function of architecture, the use of organic forms and references to science fiction.  For example, a kind of wacky “control room” at the back is an example of this, and looks as if the entire concrete spaceship is controlled from there.

Carel Visser created this artwork in 1966 and once said the following about his creation: “The Auditorium made a kind of impression on me of bites, a monster with a lower jaw and an upper jaw. I felt like sticking a sword in it. This was a kind of counter-movement. I had been working on a Salami for about ten years and as I walked around the Aula I suddenly saw what I was going to make; how heavy and how big it was going to be. From a reaction to the building, the idea of this Salami was born. A Salami consists of a long basic element from which I cut slices, as it were, so that a stack is created.”

Fun fact: It was made in 1966 in the context of the one percent regulation BKR. This involved spending one percent of the construction costs on visual art. And the Salami was the lucky one. This 1% rule was introduced to improve the environment of the workers and citizens. Carel Visser received the State Prize for Visual Arts and Architecture in 1971.

Fun fact #2: Did you know this 1% rule is still in effect? Rijksvastgoedbedrijf, which manages all government buildings, is the largest patron of visual arts in the Netherlands. Whenever the construction or renovation of a government building exceeds a budget of €1,000,000, a percentage of that budget is allocated to visual art on or near the site. 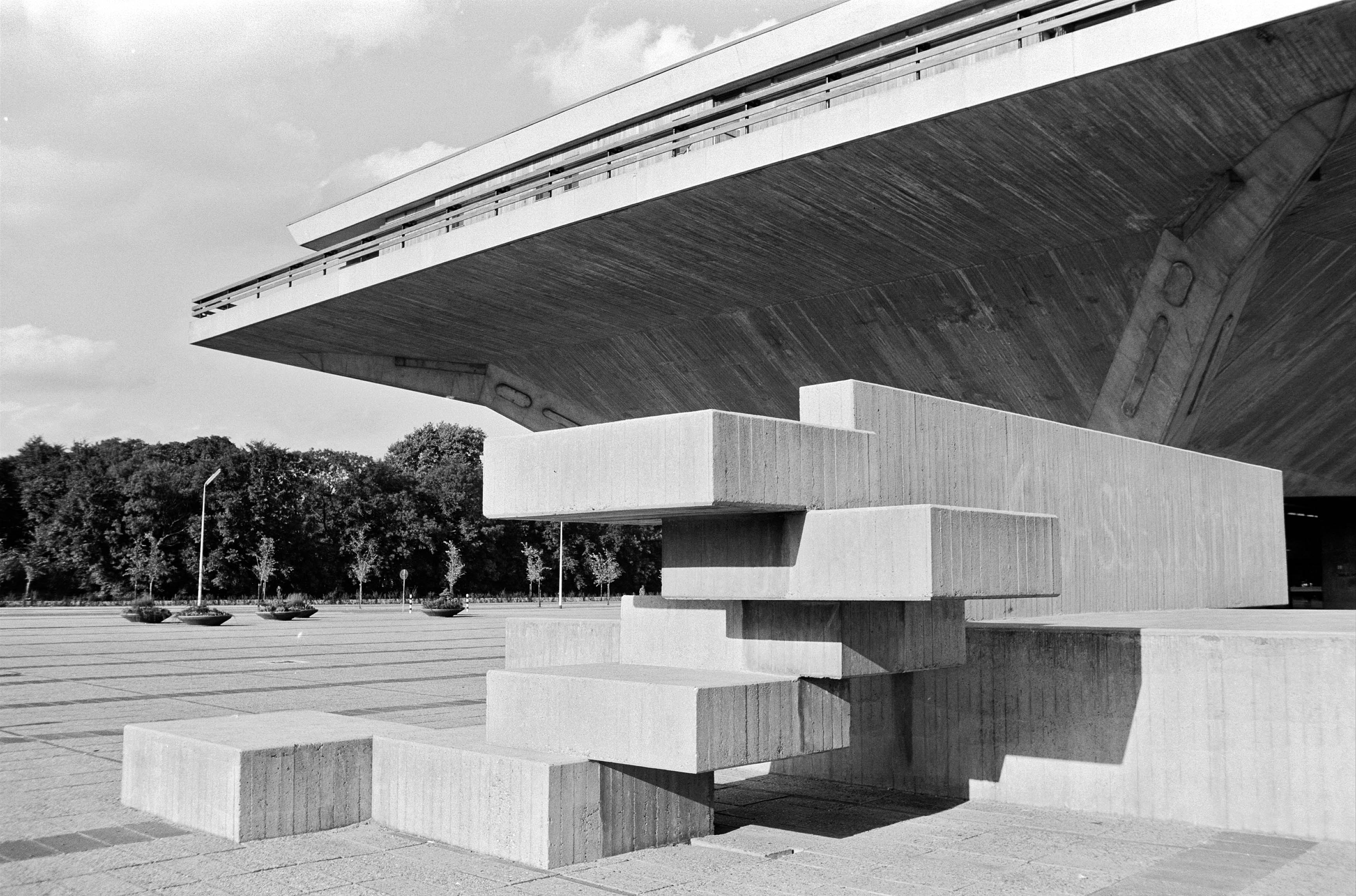 We are now walking through the mekel park, which runs for 800 meters straight through our campus. This park was constructed in 2007 and was ready for use in 2009. The reason why this park was created was so that our campus would be recognized as a high-level university. 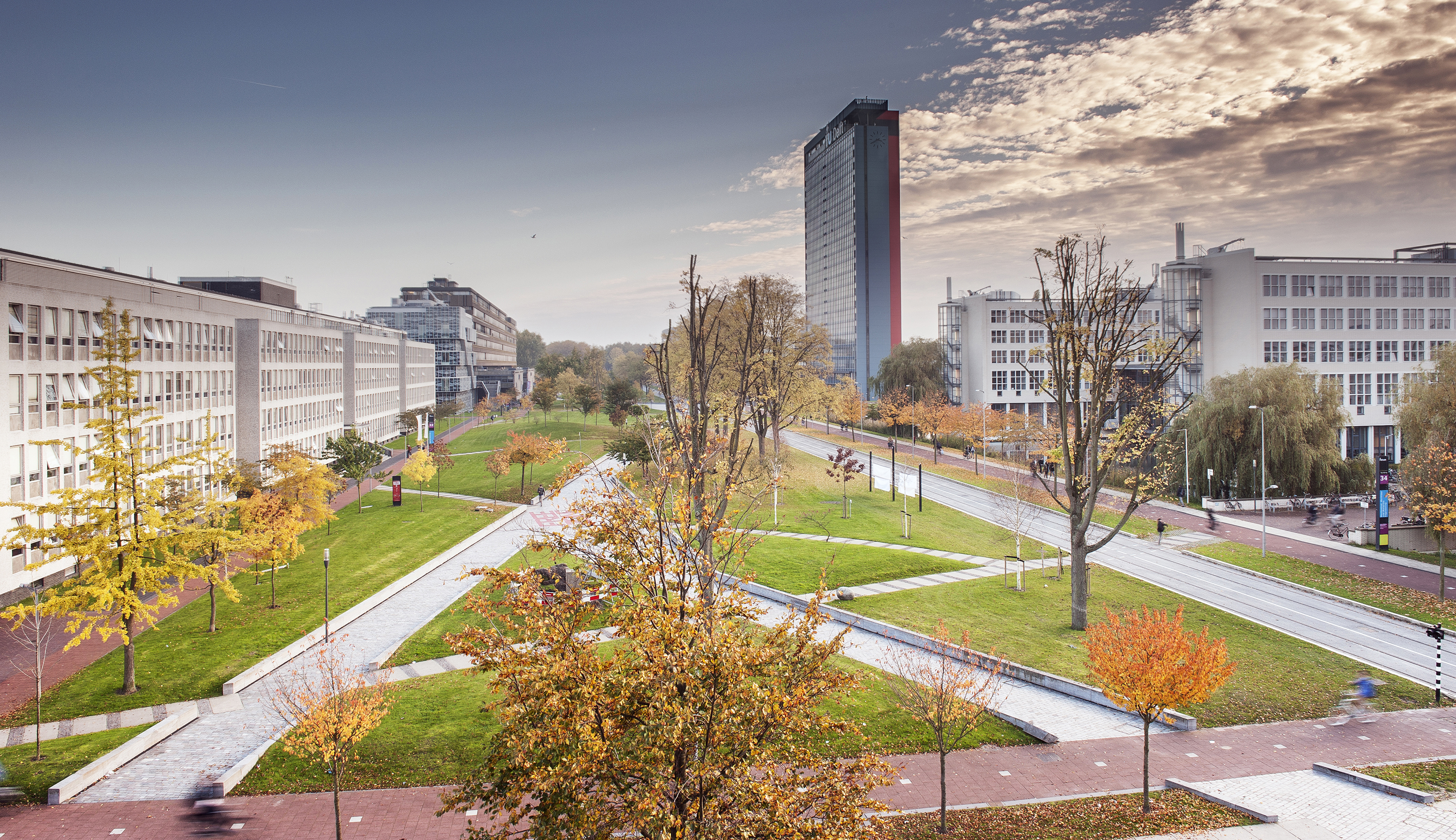 The Galileo thermometer, is based on the principle that the density of liquids is temperature dependent. Each tube of the thermometer is filled with 96% alcohol, into which floats a sphere filled with a different liquid. Each sphere rises at a certain characteristic temperature, and from where the spheres are located, the temperature can be deduced. 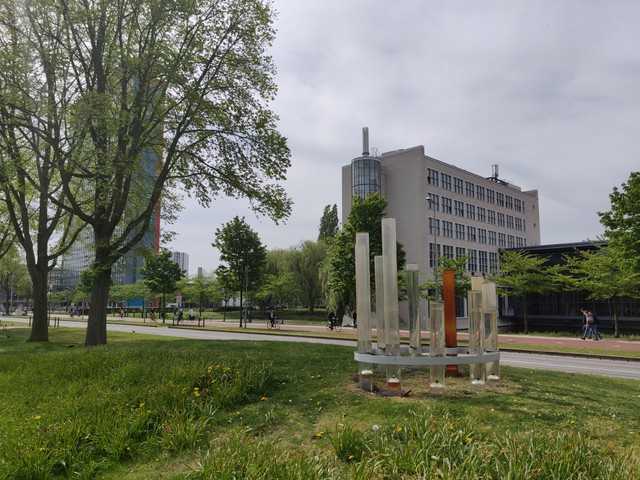 The ‘Implosion’ is the vacuum-sucked cube that stands in front of the Electrical Engineering building on the Mekelweg. In October 1992, Studium Generale donated this work of art to TU Delft to mark the 150th anniversary of the university.

Under the direction of the German artist Ewerdt Hilgemann, a perfect stainless steel column was built measuring two by two by four meters. After this, the colossus was imploded by means of a well suction dredger. At the right moment, the artist called out: “Ho!”, and then it was a work of art”.  Several hundred curious people were eyewitnesses to the collapse of the cube, which was accompanied by sudden changes in shape and wondrous sounds. After about twenty minutes, the TU had an imploded work of art. 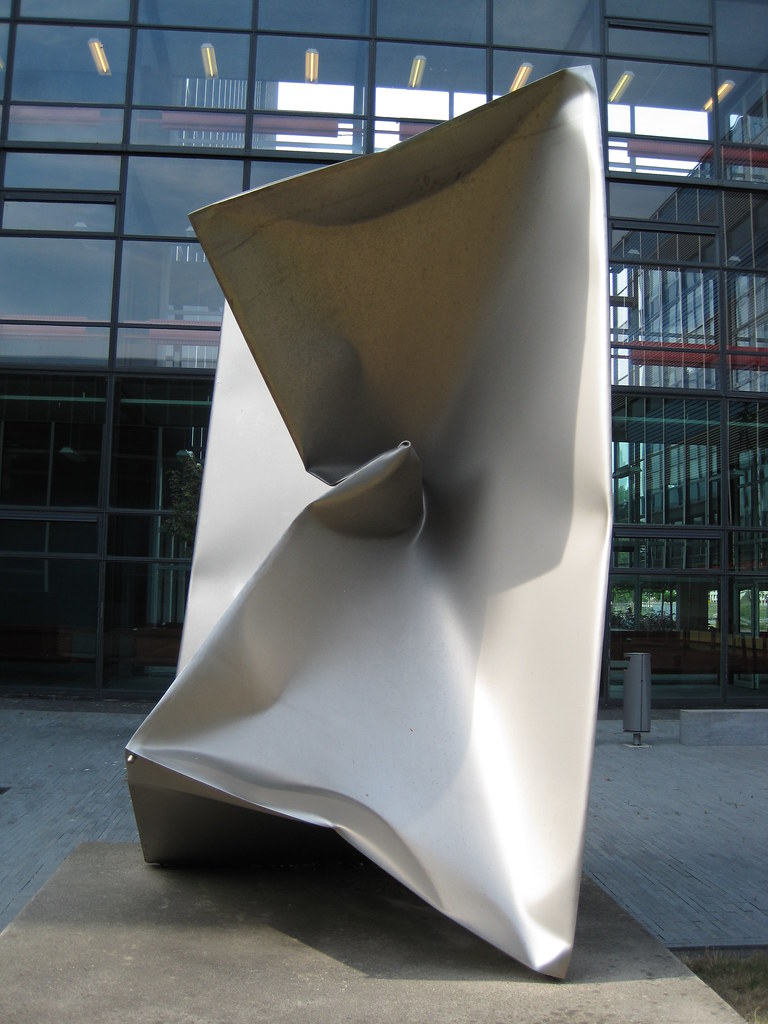 The Concrete lip has several meanings. As human lips, they represent the development in interactive communication between the faculties in the Mekel Park since its foundation. As for the material, much research has been done recently on the development of concrete.

The introduction of self-healing concrete means that the material is becoming more and more durable. And finally, concrete is a very appropriate symbol for the Civil Engineering programs. The concrete lip was presented in 2011 by the association “Praktische Studie”. 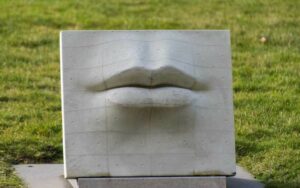 We are now at café Labs, the coffee spot of our campus. Here you can find the most delicious coffees, smoothies and lunches. And did you know that you can also come here for meetings and to work? But you can also book this location for an event or party.

Since August 1, Dennis and Katja are the new owners of Café Labs and since the catering industry has closed, they have transformed the place into a Pop-up store! Now you can find the best and hippest clothes for small prices and Dennis is always looking for nice vintage items to sell.

The Secret of the Nano

The blue spider rising from the water is an artistic celebration of nanotechnology. The sculpture was created by Dutch artist Marijke de Goey. The building has a modern, abstract look (in material terms) due to the use of steel cladding on the exterior facades.  With the long horizontal lines of the building as a backdrop, two large open cubes dance frivolously up from the pond. Intimately intertwined, they lean on each other in perfect balance, as do the TU Delft and TNO. All four sides of the cubes have nine openings each, which are equipped with LEDs. Thus, especially towards evening, the artwork itself becomes part of the starry sky. As the visitor walks up the walkway, a surprising reference to what goes on inside the building suddenly becomes visible. Floating in the water is a roguish little cube, small in proportion to the two large cubes; this is the nano, the surprise. 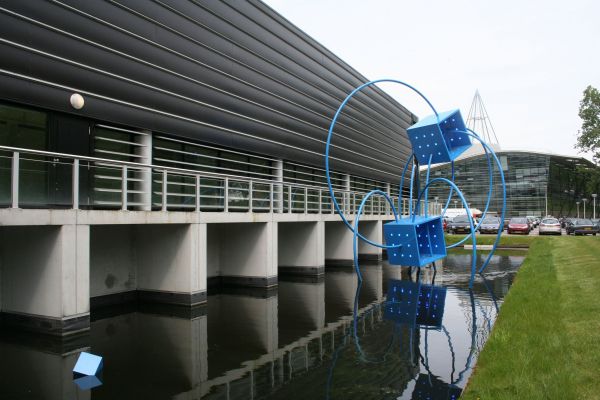 The Delft University Library dates from 1997 and was designed by the Delft-based architectural firm Mecanoo. The library is not only a building, it is also a landscape. As you probably know, the roof is completely covered with grass.

This certainly has its advantages: Namely, the grass roof has an insulating effect and counteracts large temperature fluctuations. The vegetation retains rainwater for a long time. Slow evaporation of this water in summer provides natural cooling. In addition, the grass roof provides excellent sound insulation. And last but not least: the students can chill out on it and ski down it in winter. 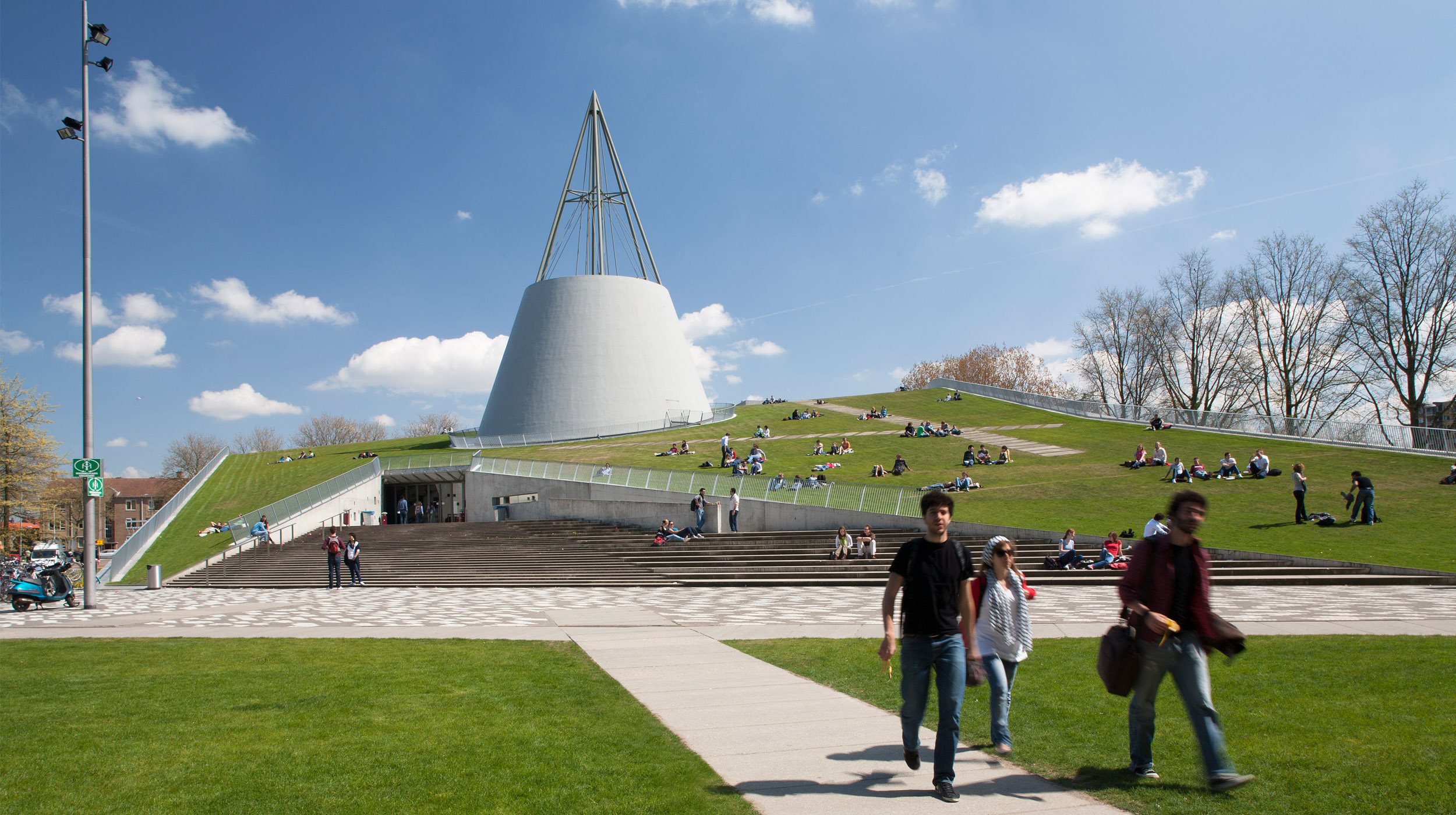